“What steps are you already taking to save energy?” Rohini Rajgopal, myPower Energy Associate and 3rd year Public Health Major, asks this question during each of the energy surveys she assists in conducting. Rohini notes that “we reach out to people with this question early on because we already have an engaged and sustainability-minded community, and we want to recognize their efforts.” While the goal for Rohini, and other members of the student survey team, is to provide personalized energy saving recommendations to labs and offices across campus, she also notes that, “collectively we’re all working towards the same goal: reducing our environmental footprint.”

Developing custom energy efficiency recommendations for offices and labs through surveys is only one element of Berkeley’s approach to energy conservation. Berkeley’s Energy Management Initiative was launched in April of 2012 and has since reported overall energy savings of $2 million along with the implementation of a campus Energy Office, a new Energy Policy, myPower outreach campaign, and incentive program.

Administrative and academic units across campus have recently received over $870,000 in the form of the first payments for energy reductions via Operational Excellence’s Energy Incentive Program. These savings represent a 1,500 ton reduction in greenhouse gases and fulfill part of the mission of the campus Energy Management Initiative to not only save energy but also to return those funds to teaching and research.

Prior to Berkeley’s Energy Management Initiative, units around campus were not provided with a statement of their energy use. And although the campus was spending around $17 million per year on electricity costs alone, this meant that energy was generally treated as a free commodity.

The Energy Incentive Program (EIP) is an innovative approach to energy management that gives departments (or Operating Units – OUs) across campus a financial incentive to implement energy-saving measures. Electricity usage baselines were set (generally based on 2010-11 use) at the beginning of the program. A process managed by the Energy Office allows adjustments to baselines and to exclude savings from centrally-funded Strategic Energy Plan (SEP) projects.

Similar to what happens at home (but on a much larger scale), OUs now receive monthly electricity statements detailing use in buildings. Through these statements from the Energy Office, OUs can see how they measure up to their historic use. If the OU is using more energy than usual, the Energy Office follows up with resources to proactively seek problem areas. By reducing energy use below their historic average, the unit will receive an incentive payment for the difference. Beginning this fiscal year (FY14) those Units that exceed their historic baseline will be incur an overage charge. “It’s a carrot and a stick,” says Chuck Frost, Energy Manager, “incentivizing energy reduction efforts is a key element of our program.”

Three other units stood out for size-adjusted savings: IST, L&S (Biological Sciences), and the Graduate School of Education. Conversely, the two units with increased electricity use last year have been working diligently with the Energy Office and myPower teams to improve energy performance.

Use of the incentive payments is at the discretion of Vice Chancellors and Deans, no strings attached. One interesting model for re-distributing the funds can be seen in VC for Administration and Finance (VCAF). Their payment of approximately $10,000 funded a “mini-grant” for anyone in the unit to submit proposals to drive down energy use.  Requests totaled over $18,000 for projects such as replacing inefficient refrigerators with newer models and installing lighting motion sensors, underlining the need and interest for this innovative program.

Resources for departments to explore reinvesting in energy savings can found on the Energy Office website and myPower.berkeley.edu. You can also contact the myPower student team at myPower@berkeley.edu to schedule a personalized energy survey to receive personalized recommendations for your office or lab.

myPower enables students, faculty, and staff to make informed decisions about energy use that will reduce energy costs and return funds to teaching and research. myPower is part of the Energy Management program that also includes the Energy Office, an Incentive Program, and a strong campus energy policy.

Do you know how much energy you’re consuming on campus? Through myPower you can find the energy dashboard for your building. You can also discover resources to help you take actions beyond what you're already doing towards reducing energy consumption in offices, labs, and residence halls.

See the energy consumption for campus buildings via our Energy Dashboard:

1. TURN OFF WHAT YOU’RE NOT USING

3. REDUCE THE ENERGY USED BY YOUR COMPUTER

Stock Up on Stickers! 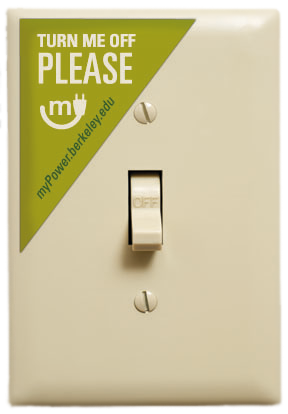 Visit the Resource Center in 192 Barrows Hall to pick up light switch reminder stickers and posters or check out a kill-a-watt meter.Email us for more info!