Every Drop Counts: The California Drought and the Campus

Did you know that since February, the campus has reduced water use by ten percent? For an array of useful tips on how to save water on campus and at home and for more information on what UC Berkeley is doing to conserve water, visit the campus drought alert page here.

As you probably know, California is currently experiencing a drought. But just how bad is it? In short, it’s devastatingly bad. More specifically, California is in its third consecutive year of below-average precipitation and is facing one of the most severe, if not the most severe, dry spells ever recorded. Almost all of California is in a “severe” drought, and nearly sixty percent, including Berkeley, is in an “exceptional” drought, which is the worst ranking on the US Drought Monitor report’s five-step scale. 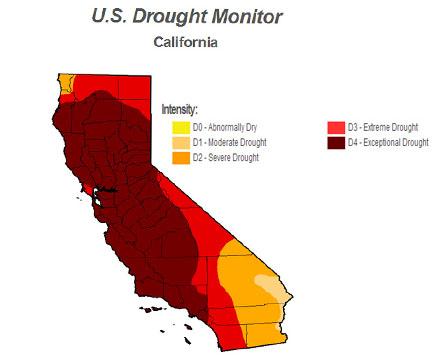 The low levels of winter rainfall, and thus the drought, have primarily being caused by what originally was a four mile high, 2,000 mile long high-pressure ridge over the Pacific Ocean, which first developed in December 2012. The ridge pushed storms and precipitation that normally would end up in California farther north. As a result, during winter months distant northern areas such as Alaska had increases in rainfall and abnormal weather events, while California became drier and drier from the lack of precipitation.

Although such high-pressure areas often form in winter, they usually break down relatively quickly, making the persistence of this ridge unique. The intensity and size of this ridge have fluctuated since the beginning of the drought and while the ridge temporarily petered out, as of mid August 2014, the ridge has returned, albeit with less intensity than before.[i] Although there is uncertainty over the precise cause of such an abnormal ridge, and the extent to which anthropogenic forces played a role in its origination and resilience, there is no question that the resulting drought has had harmful effects.

The most obvious manifestation of the drought’s negative effects is in reservoir levels throughout the state, which are far below historic averages. Reservoirs serviced by the East Bay Municipal Utility District (EBMUD), which provide water for East Bay residents, are currently at less than seventy percent of average. The plummeting reservoir levels are due to both reduced runoff from last winter’s storms and from greatly reduced snowpack, which is less than fifty percent of normal, and which typically would provide a significant inflow to the reservoirs.[ii]

The economic and social impact of the drought is huge. A comprehensive report out of UC Davis explains how this year alone, the drought will cost the state over two billion dollars and will cause around 17,000 agricultural workers to lose their jobs.[iii] The dry conditions have intensified the strength of wildfires that have occurred in the state and make wildfire occurrences more likely. Further, a recent study suggests that the drought may contribute to increased numbers of earthquakes along the San Andreas Fault; the depletion of groundwater in the San Joaquin Valley is causing an uplifting of the lithosphere in that area, which could lead to heightened seismic activity.[iv]

Finally, humans are not, of course, alone in being directly affected by the abnormal aridity. Many species of wildlife are already suffering from and will increasingly be endangered by the negative effects of the drought. For example, many species of California waterfowl have already had to change flying patterns on account of drier riparian areas. Large numbers of Northern California bats, which are necessary for controlling insect populations, are dehydrated and dying, and the endangered coho salmon faces potential extinction without more precipitation.[v]

What is the state doing?

All these alarming consequences beg the question of what is being done to try to ameliorate the problem. Governor Brown declared a drought emergency on January 17, 2014, and on July 29, 2014, the State Water Board emergency regulation requiring all Californians to restrict water use went into effect.[vi] The restrictions include: watering no more than twice a week, not watering outdoor landscapes to the extent that there is runoff, using only hoses with shut-off nozzles to wash a car, using potable water in decorative fountains only if the water recirculates, and not washing driveways or other outdoor areas. Along with the emergency regulation, Governor Brown has called upon all Californians to voluntarily reduce water usage by twenty percent.

What is the East Bay doing?

EBMUD is providing guidance and assistance for Berkeley residents on ways to conserve. EBMUD offers numerous rebate programs and free conservation items to customers to make it easier than ever to save water. Click here for more information.

What is UC Berkeley doing?

UC Berkeley has always been an excellent leader in water conservation. Even prior to the drought, in 2011, the campus set a goal to reduce potable water use to ten percent below 2008 levels by 2020. The campus is past the halfway mark toward that goal, and total campus use is down a total of seventeen percent since 1990. 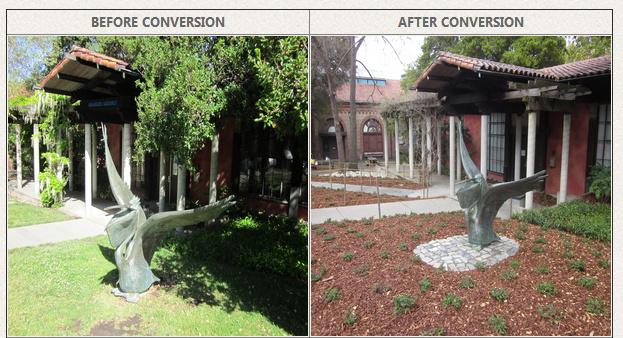 Since the start of the drought, UC Berkeley has heightened its efforts to conserve water, and has further reduced main campus water use by ten percent. UC Berkeley has implemented numerous water conservations efforts. For example, the campus is using meter data to identify leaks and the education campaign Every Drop Counts includes information on how to report leaks. Irrigation has already been reduced to fifty percent of normal, and irrigation investment at Botanical Garden will reduce flow by forty to fifty percent. Over ninety percent of campus irrigation systems are automated and connected to a weather station-based controller, and high efficiency systems include drip and low precipitation sprinkler heads. The campus has also converted nearly 68,000 square feet of turf grass area to native or drought tolerant species or to permeable surfaces, and the campus plans to expand this lawn conversion program.

While UC Berkeley has already taken numerous steps to conserve water, it is in the process of adopting further policies in accordance with EBMUD’s drought emergency restrictions. For example, the campus will limit irrigation to twice a week, so do not be surprised if the lawns and fields look slightly less green than usual. Overall, UC Berkeley is fully committed both to doing its part to support and implement the new emergency restrictions and to using water minimally wherever possible.

You can help, too!

Everyone on campus has a role in water conservation and even small steps can make a big difference. Although some new predictions are hopeful, indicating that winter may bring normal levels of precipitation, the drought is likely to persist through next year even in the best-case scenario[vii] Hence, saving as much water as possible now is truly essential.

To easily calculate how much water you’re actually using and to see where you can cut back, click here.

Finally, for more information on the East Bay and California responses, click here and here.

Stay tuned for more information on further steps the campus will be taking to follow the emergency drought restrictions and to conserve water!