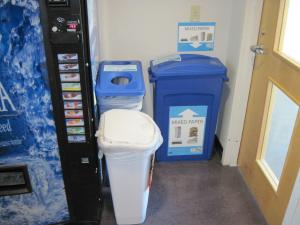 High above the clock tower and overlooking campus is UC Berkeley’s Space Sciences Laboratory (SSL), established in 1958 for the purpose of conducting space research.  SSL ventured into new territory recently as it introduced a four-bin waste management program at its three buildings on the top of the Berkeley Hills.  Until last fall, no such program had ever existed at the lab.  And it turns out that the program was not only something SSL never had, but it was also something that SSL realized it needed.

In the spring of 2015, several SSL staff members wondered if there was a better way to manage the waste generated on-site by its 315 employees, and they decided to contact campus to get the process going.  Around Earth Day 2015, Darlene Yan and Jeff Countryman started working with Nicole Cuellar from the Campus Recycling and Refuse Services.  Excitement was in the air, but while the conversation started, things weren’t quite ready to move forward.  After a short break, Nicole and the SSL team reconvened in the fall of last year and determined that SSL could feasibly put the new system in place within months.  By the end of November, they achieved their goal. 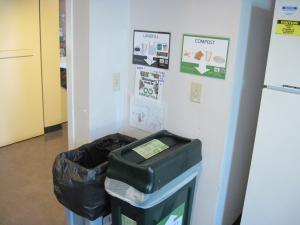 The four-bin system (the “Slim Jim” set) includes one blue bin for aluminum, plus glass and plastic bottles, another blue bin for paper and paperboard type materials, a green bin for food and other compostables, and a brown bin for landfill.  In total, there are six large and small “kitchen areas” at SSL, and all are now equipped with the Slim Jim set.  There are also sets located in each of the three floors at the Addition building, and in a handful of other locations in the two smaller buildings where staff tend to congregate.  In addition, nearly all employees at SSL have been provided a “mini-bin” under their desk for paper and landfill.

As if that weren’t enough, Darlene began tackling the remaining waste that SSL could not recycle or compost through Terracycling, a cash-for-trash program that accepts items such as candy wrappers, juice boxes, Ziploc bags, chip bags, and even toothbrushes and returns money to the dedicated collectors.  Through Darlene’s tireless efforts, and with the amazing participation of staff, SSL reeled in over $250 through Terracycling in the fall alone.  While the Terracycle program does accept a wide range of items, not everything can be sent off, but the SSL team found a home for most everything else.  Now plastic clamshell containers, tin cans, and other recyclables are collected and taken to the El Cerrito facility.

Through SSL’s drive and CRRS’s direction, the first-ever four-bin system was launched at SSL and has proven to be a success.  The change has been met positively by SSL staff, and the hope is to continue reducing the Lab’s contribution to the landfill bringing UC Berkeley one step closer to the 2020 Zero Waste goal.